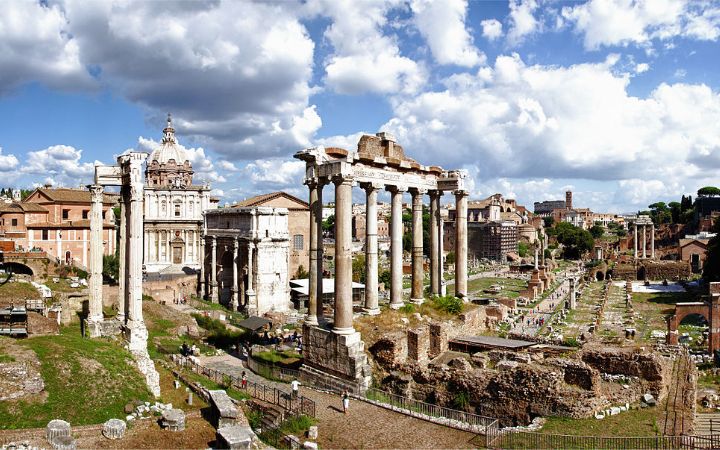 Experience a day in ancient Rome in the political, economic and religious heart of the Empire: the Colosseum Valley.

The largest complex for exotic hunts and gladiatorial fights, the Flavian Amphitheater was simply “the Amphitheater” for the Romans while later, for everyone, it became the “Colosseum.” You will discover the history, life, decay, abandonment and rebirth of the most iconic symbol of the eternal city. Explore with us the most famous valley in history!

We will walk together along the pavement of the ancient Via Sacra and admire temples, gardens, porticoes, basilicas and famous Roman Senate. We will climb the slopes of the Palatine Hill and look at the Circus Maximus from the perspective of the sumptuous imperial palaces.

The tour price does NOT include the integrated entrance ticket to the archaeological site “Colosseum-Roman Forum-Palatine”. It is possible to purchase the ticket through Visit Ostia Antica upon request (email: info@visitostiaantica.org or visitostiaantica@gmail.com). Minors enter for free.

There is a discounted price for those under 18 years of age: 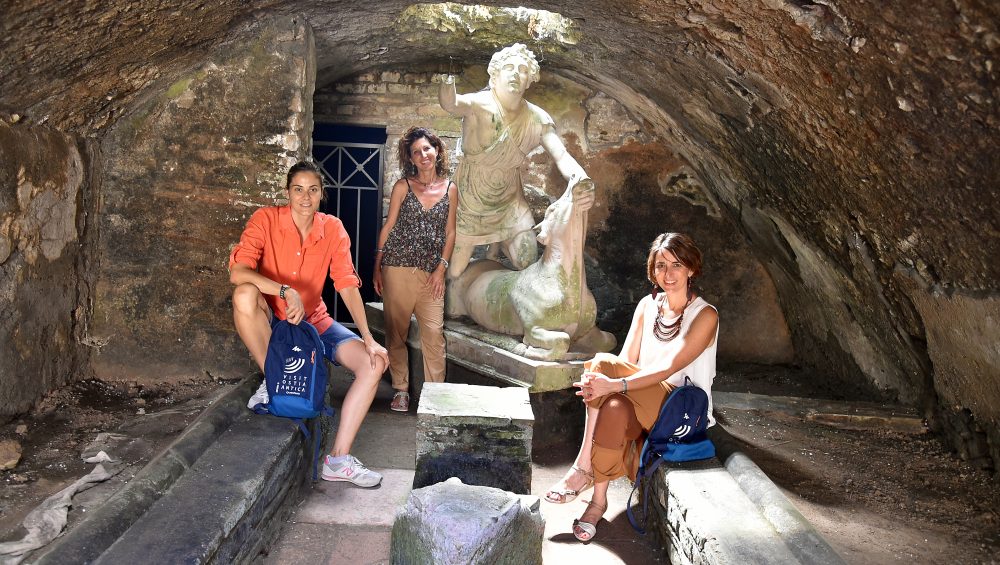 Overview
Discover with us the fascinating world of religions that coexisted in the Roman Empire for centuries and the secrets of the mystery cult of Mithras.

All our guided tours are always carried out by qualified tour guides who are experts at the Ostia Antica site.

This is dedicated to the many religions, mystery cults and magical rituals that coexisted in Rome, that often landed on the Italian coasts from the eastern regions of the Empire.

Ostia Antica, the port of Rome on the River Tiber, has been for many centuries a crossroads of languages, ethnicities, traditions and religions. Before Christianity became the official religion of the Empire (380), Ostia hosted gods of different origin: from Magna Mater, Isis, Attis and Serapis. Furthermore, Ostia also preserves one of the oldest synagogues of the Mediterranean area. This tour will let you discover some little-known parts of Ostia, which are essential to understand the dynamics of the ancient world. A fascinating journey that will touch, among other things, several mithraeums: the mystery cult of the god Mithras, brought from Persia by Roman soldiers, was in fact exceptionally widespread.

The price of the tour DOES NOT include the entrance ticket to the excavations of Ostia Antica.

Teenagers from 13 to 17 years = 40 EUR [we recommend, in the case of family groups, to consider the Family Tour option on this site]. 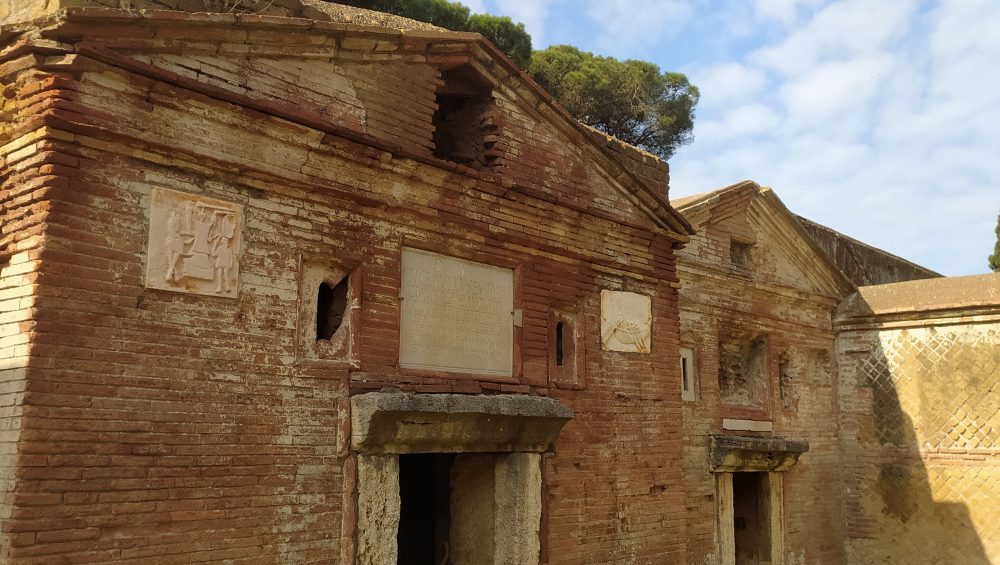 The mystery of death in ancient Rome and the many people buried in perfectly preserved tombs to be discovered.

The Necropolis of Portus (or Isola Sacra) is a vast cemetery that developed around the ancient Via Flavia-Severiana starting from the 1st century AD. A group of about 100 burials completely immersed in the silent nature of the surrounding countryside.

Along the way you will be able to observe and enter the ancient tombs that still retain part of the fascinating fresco and stucco decoration and you will get to know the names and stories of some of the people buried there. The exceptional state of conservation of the tombs make this necropolis a site of world significance.

Admission to the archaeological site is free (until October 2022) 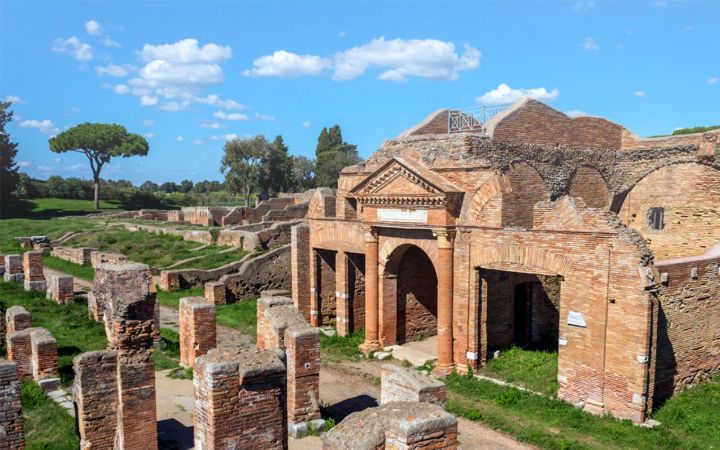 The tour “The Best of Ostia Antica” will allow you to visit the most important buildings of this extraordinary archaeological site in which ancient ruins and nature blend to create fascinating landscapes.

Ostia was founded, according to the ancient sources, by King Ancus Marcius in a strategic area from a military and commercial point of view. It was the first Roman colony, the port of the city of Rome at the mouth (ostium) of the river Tiber.

Along the way you will be able to see the grandiose theater dating back to the time of Augustus and still in use, the Baths of Neptune and its mythological mosaics, the remains of the imposing Capitolium that dominates the square of the Forum and the famous insulae and tabernae. Considered the best preserved Roman city in the world (together with Pompeii but much larger), Ostia Antica is really a place where it is possible to experience the daily life of the ancient Romans over a chronological span of eight centuries.

All our guided tours are carried out by licensed tour guides who are experts at the Ostia Antica site.

The entrance ticket to the excavations is NOT included.

Teenagers from 13 to 17 years = 30 EUR [we recommend, in the case of family groups, to consider the Family Tour option on this site].

Overview
The Family Tour is designed to allow families to visit Ostia Antica at an advantageous price. The charm of this Roman city suspended in time will captivate you!

All our guided tours are always carried out by qualified tour guides who are experts at the Ostia Antica site.

The archaeological site of Ostia Antica is a magical place where young and old can experience the unforgettable experience of a journey through time and learn about the habits, vices and virtues of the ancient Romans. We will discover together some of the most famous places in Ostia Antica such as the Theater, the Baths of the Forum, the public latrines and the Thermopolium, a real fast-food restaurant of antiquity. Our family tour is designed to satisfy the curiosities of the older ones and stimulate the little ones without tiring them too much: for this reason the expected duration is about 1h45. Get to know this fascinating place surrounded by nature and away from the noise of the city!

THE WHOLE FAMILY TAKES PART IN THE TOUR: MOM, DAD AND THEIR CHILDREN (up to 17 years).

The entrance ticket to the Ostia Antica Archaeological Park is not included. Please note that minors up to 17 years of age enter for free.

For special requests or to receive further information, do not hesitate to write to us: info@visitostiaantica.org.