The territory of the Roman coast between Lido di Ostia and the municipality of Fiumicino is extremely uniform both from the morphological point of view, due to the presence of the Tiber river and a coast characterized by dunes and Mediterranean scrub, and from a historical point of view. , as the river itself has been the main communication route between the sea and the capital of the Roman Empire for centuries. The Tiber and the sea therefore strongly influence both the anthropization and the course of the coastline, causing its slow and inexorable remodeling. The foundation of the ancient Roman colony at the mouth (= hostium) of the Tiber is attributed by the sources to the fourth king of Rome, Anco Marzio, even if the archaeological evidence traces the construction of the first military castrum back to a more recent period, that is to ‘around the beginning of the fourth century. BC, while it is certain that the seaports, built by the emperors Claudius and Trajan, date back to the 1st and 2nd centuries respectively. A.D.

The natural beauties, the presence of a real Roman city which by extension and state of conservation can only be compared to Pompeii, the proximity of equipped free beaches and the proximity of the Leonardo da Vinci intercontinental airport, are just some of the characteristics that make this territory (which is only 20 km from the center of Rome) an area with a strong tourist vocation, thanks also to events that have now become traditional such as the Palio di Ostia Antica or the Sagra della Tellina. 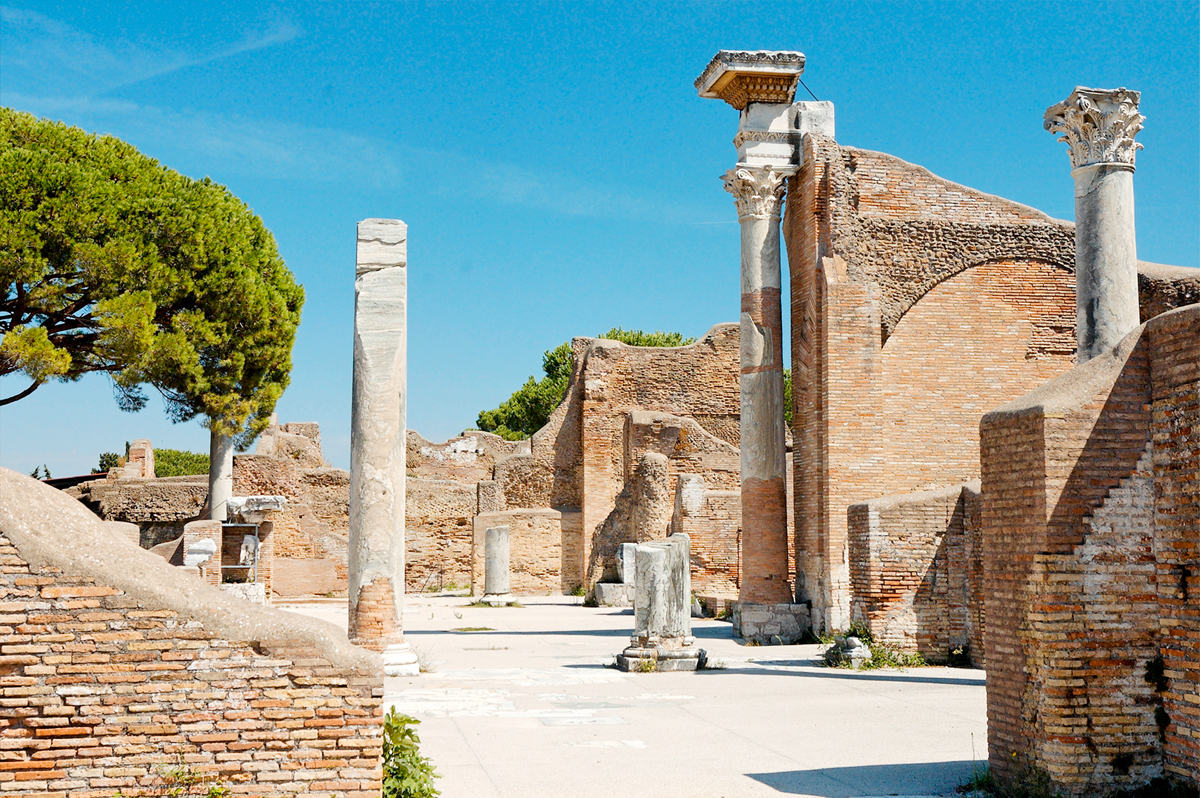 The ideal epicenter of this cultural tourism is the locality of Ostia Antica, a medieval village built around an early Christian basilica of Constantinian foundation (“Gregoriopoli”), completely rebuilt in the Renaissance period with the encastellation of the site at the behest of Pope Julius II. The village, easily reached by public transportation thanks to a stop on the Roma-Lido train, is only a hundred meters from the entrance to the Ostia Antica Archaeological Park, famous for the exceptional state of preservation of impressive architectural structures that narrate the lives of their inhabitants, in a context still being studied by passionate researchers from all over the world. Even outside the archaeological area in the strict sense of the word, there are numerous testimonies to the long history of this area, which, even after the collapse of the Western Roman Empire in the fifth century AD, continued to be of strategic importance for the control of the river mouth and especially for salt production. Here, then, the remains of rustic villas, early Christian necropolis and sections of the ancient Via Severiana are flanked by medieval watchtowers (e.g., Tor Boacciana and Tor San Michele). Crossing the river, one enters the territory of Fiumicino, where one finds the imposing remains of the imperial ports and the necropolis of Isola Sacra (or necropolis of Porto), which, completely forgotten until the late 1800s and excavated only since 1925, presents a state of preservation that is unparalleled.

And it is always because of the Tiber and its tumultuous course that this area, the center of trade of the Roman Empire at its apogee, was completely abandoned for centuries, turning into a marshy and malarial area. In fact, the disastrous flood of 1557 diverted the riverbed, creating a marshy area called the “dead river” and abruptly shifting, due to the accumulation of debris, the coastline. It was only with the annexation of Rome to the Kingdom of Italy in 1871 that (after several unsuccessful attempts by the Papal State) it was decided to reclaim the marsh by transforming it into land for cultivation and habitation. The “third life” of the Roman Littoral (after the Roman, the medieval and the Renaissance) tells of another humanity, a story of immigration and integration, that of the world’s first cooperative of laborers who settled here from Ravenna, defying hunger and malaria. A disease that was extremely widespread at the time, debilitating and often deadly, studied in this very area by Dr. Giovanni Battista Grassi, who identified the anopheles mosquito as the cause of this disease that was until then attributed to unhealthy air (“mal’aria”).

Once the reclamation was completed between 1884 and 1904, it was possible to think about the redevelopment of the Litoral and the first plans were made to make Ostia a “garden-city.” The Genoese engineer Paolo Orlando was the one who more than any other engaged in this undertaking. 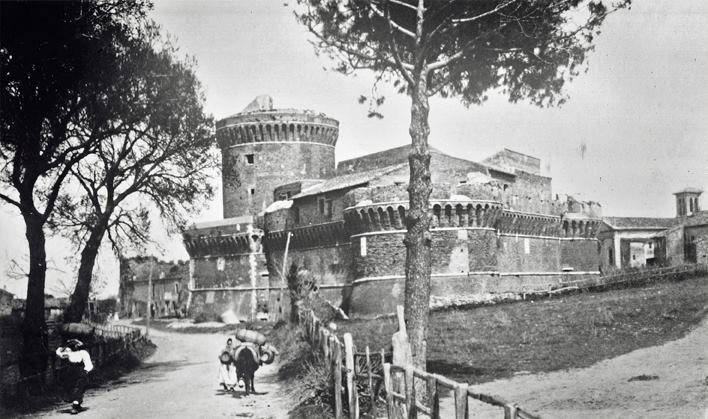 1907 can be considered the founding year of the seaside township called Ostia Nuova while the first Master Plan dates back to 1916, by a commission composed of, among others, the famous architect Marcello Piacentini. The model of this master plan was that of the garden-city, respectful of the dune pattern of the landscape, with low buildings and many green spaces. On one side stood the popular district, located in the immediate vicinity of the future Roma-Lido electric railway station (1924) and centered on a system of streets and squares equipped with tourist-receptive facilities; on the other side was the park district, intended for the construction of small villas of a stately character. Finally, the centerpiece was the civic center (a kind of “forum”), overlooked by the church, schools, market, and municipal delegation. The watchwords were decorum, tranquility and lightheartedness.

In 1915 Giulio Magni designed the Regina Pacis church, while Marcello Piacentini’s design for the Maritime Hospice, a center for the treatment of childhood tuberculosis, which still dominates the Paolo Toscanelli Promenade and houses, among other things, the Elsa Morante Municipal Library, dates from 1916.

In 1919 the first constructions began, which were concentrated on the seafront and neighboring streets. The result was the typical villini of Ostia, characterized by stucco, friezes and delicate sculptural details that mix heterogeneous elements in a style called “Roman Baroque.”

The history of Ostia Moderna thus begins well before the grip of the rise of Fascism in 1922, although Mussolini certainly left his mark on “Rome’s gateway to the Mediterranean,” which he considered of absolutely strategic importance for the exhumation of Rome’s ancient glory and the establishment of Italy as an imperial power. Between 1922 and 1927, among other things, the elegant Roma bathing establishment was built, full of late-liberty suggestions, dominating the waterfront with its huge dome, equipped with large outdoor terraces, dance halls, luxury restaurant, café, telegraph.

In the years straddling the 1930s, buildings inspired by different architectural styles were constructed in Ostia: from Roman Baroque (similar to that of the Garbatella district) to Rationalism, evident in particular in the outcome of the competition for the construction of 15 small villas announced by the Società Tirrena in 1932, in which Adalberto Libera, among others, participated.

With the Detailed Plan of Ostia Lido, which resulted from the 1931 Master Plan of Rome, Ostia definitely lost its original function as a seaside and tourist center. Ostia, in Mussolini’s idea, was to turn out to be to all intents and purposes a neighborhood of Rome, reachable thanks to the Via del Mare, inaugurated in 1928, and then also thanks to the Cristoforo Colombo, the Via Imperiale that from the walls of Rome and passing through EUR would connect the city center with the sea, completed, however, only in 1954.

In 1933 Ostia changed its name to Lido di Roma, but with World War II everything came to a standstill, until Ostia was occupied by German troops who undermined the Littoral and blew up buildings considered strategic: the railway station, the wharf, the Roma establishment, and the tower of the Collegio IV Novembre. Laboriously Ostia recovered, becoming again a tourist center in the 1950s and 1960s, as well as the set of many films from the golden age of Italian cinema, as was the case with Federico Fellini’s “I Vitelloni.” Then a new decadence, recounted by one of the most controversial intellectuals in the history of Italy: the poet and director Pier Paolo Pasolini, who found a violent and bewildering death in the Idroscalo area, which is still a subject of debate. The Ostia of the new millennium, overwhelmed by scandals but still beautiful and fascinating, is yearning for redemption, ready to be reborn once again. 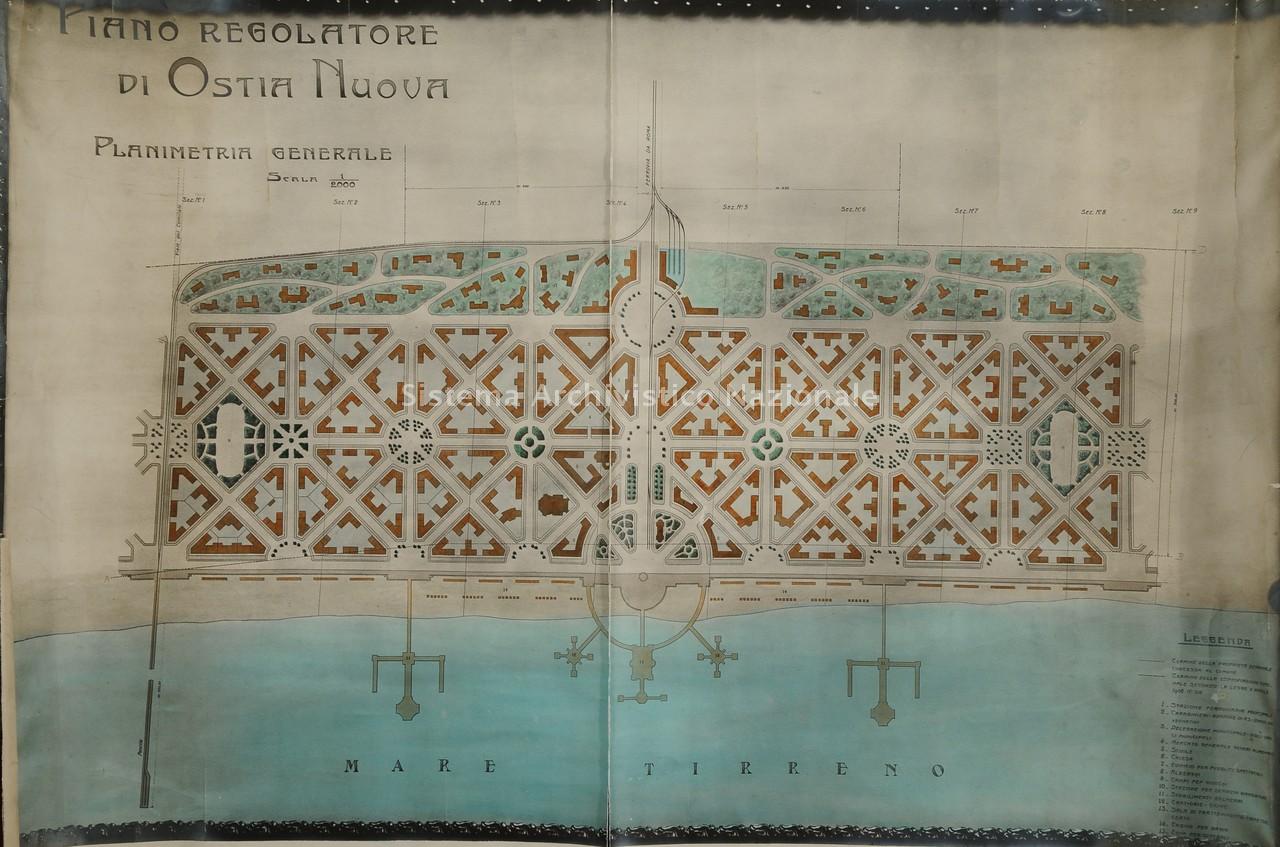 Lots of nature between sea and pine forest!

The evolution and continuous changes in the layout of the coastline and the course of the Tiber River have altered our perception of the environment over time. If our ancestors knew how to live in symbiosis with a dynamic nature, it is up to us today to recover a healthy relationship with the territory. The Roman Littoral hosts real gems from the naturalistic point of view that are just waiting to be rediscovered. For example, there is precisely in Ostia Antica a green circuit around the modern blockhouse that reaches the riverbank and has long been a nature reserve (State Nature Reserve “Litorale Romano“). There is the possibility of developing archaeo-botanical itineraries in the non-urbanized areas, where archaeological pre-existences are also preserved (e.g., sections of the Via Severiana or the so-called Villa di Plinio in the Pineta di Castel Fusano). Walking, biking, horseback riding or buggy rides can be proposed in the countryside that stretches between the Tiber and the excavations of Ostia Antica, in the Pineta di Castel Fusano or on the beach of Capocotta (one of the best preserved stretches of dunes in Italy), located between Torvajanica and Castel Porziano, the estate of the President of the Republic recently reopened to the public. The latter, which began as a hunting and agricultural reserve, has maintained a very high level of biodiversity, with about 1,000 species of flowers and more than 3,000 species of animals, including wild boar, fallow deer, roe deer, foxes, hedgehogs, beech martens, skunks and rabbits, as well as many species of insects and birds. These can also be seen at Lipu‘s Mediterranean Habitat Center, built near the Ostia tourist port at the mouth of the Tiber River. Continuing along the Via Litoranea, one can then visit the Secche di Tor Paterno Marine Reserve, a true paradise for divers, sport fishing enthusiasts or simple nature lovers, just a few kilometers from Rome and too often forgotten. Finally, again by virtue of the characteristics of this sandy and windy coast, Ostia is the ideal place to practice sports such as windsurfing and kitesurfing.