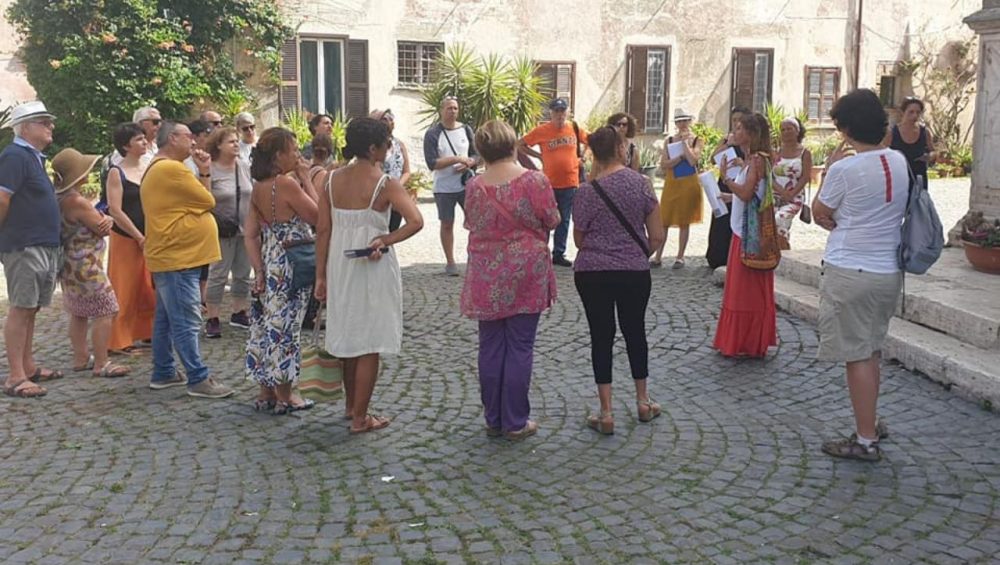 Why did you decide to become a tour guide?

Being born in a city like Rome meant a lot to me: the passion also reflects the habits of my family which, having been Roman for generations, has considerably influenced my personal perception of the city. The playground of my childhood was Villa Celimontana, in Villa Borghese we went by bicycle, with skates, to ride a pony. We reached the park near the house, the one with the big tower around which we played hide and seek: ah yes! The Mausoleum of the Gordians.

Going to school I learned to recognize in those streets, parks and squares, famous places known all over the world and familiar to me because I had grown up there. The Fontana de ’Trevi was the place to look for the shoe shop while in Campo de’ Fiori we stopped for the white pizza from the Forno.

Over time, the experience of life was accompanied by that of a schoolgirl and then a student. Rome was therefore filled with statues, fountains, temples and churches. Each place told a story, stories of more or less famous people, artists, scientists, architects, dictators: how much story told and perceived everywhere!

It was after a trip to the Etruscan necropolis of Cerveteri that everything became clearer. I was 6 years old and then I decided that I would become an archaeologist.

The ancient and modern world coexisted in daily life in an extraordinary experience, touring in my city never lacked the opportunity to offer help to a tourist who, with a map in hand, asked for information. Giving advice to those who got lost made me happy and satisfied.

Getting lost in Rome is still the best advice I can give to anyone who really wants to understand this beautiful and controversial place.

Offering the opportunity to see new corners and glimpses of this city of a thousand faces makes it easy for me to be a tourist guide, which I have always experienced more as a pleasant hobby than as a real job. Every weekend was an opportunity to shoot and so, after visiting one of the catacombs of Via Appia Antica, one could not fail to stop at the Fosse Ardeatine Memorial, still a sign of that history so present, so easy to read and perceive. , enough to be able to relive it, a powerful experience.

The increasingly specific studies in the history of art and the curiosity for foreign languages ​​soon led me to carry out guided tour services at a very young age to finance my studies. Rome, the passion for archaeological research and finally private life, complete my professional growth towards an activity, the tour guide, which encompasses all these aspects and which still today stimulates the desire to share the pleasure of walking through history.

In some ways I feel privileged, so much luck must be shared! What is special about Ostia Antica for you?

From an exquisitely professional point of view, and I speak as an archaeologist, how can you not appreciate a place that has been preserved through history so well that it can be considered to all intents and purposes a sort of manual of antiquity? It almost seems that our ancestors and then nature have a common agreement decided to leave as a gift something that reminds us of ours, a memory of theirs to pass on to give us a way to learn and improve!

An entire city where the signs of time are evident, which have progressively changed its appearance by expanding it, improving it or simply adapting it to new needs. This place is also part of my growth. In summer, theatrical performances were seen in the ancient Roman theater of Ostia Antica.

Here, more than in many other places, you can savor the charm of the discovery of the archaeological adventure in a broad sense … also because we know that much more than what we see is still there under the vegetation, ready to reveal itself. The ancient city lies in a flat corner of land between the mouth of the river, the sea and the pine forest that characterizes the coast, a pine forest in the shadow of which other ancient sites have been found, traces of an archaeological full that offers as well as the area of ​​Ostia Antica, a perfectly preserved necropolis and still enormous structures linked to the basins of the imperial ports of Rome, a vast system inextricably linked to the supply events of the capital of the Roman Empire.

An area embellished by a Renaissance village that was the object of the attention of an important pope like Julius II, who in the middle of the Renaissance built an imposing fortress right here to control the River Tiber. The Borgo, in perfect condition, offers the opportunity to live an experience where time seems to have stopped waiting for a mass in the beautiful basilica of S. Aurea or for a visit to the castle.

What are your favorite tours?

Sharing what you know is always a way to know more, and from the questions of tourists you often get a different perspective, the experiences compared amplify the discussion, an original observation leads you to investigate and find new answers. In short, you never stop learning. I must admit that due to my training I prefer guided tours in open spaces and archaeological areas! The Colosseum remains for me an experience for the soul and from there the largest open-air museum awaits us to amaze us with squares, churches and fountains! Ostia Antica and what the area in which I live today offers, I seriously believe that it gives the opportunity to amplify the experience of the Roman tour by enriching it and elevating it to a more unique than rare dimension. Honestly, my favorite tour changes depending on who I meet, for me the journey begins when I meet people. It is not the places but the experience that makes the place beautiful.