The Borgo di Ostia Antica: a jewel suspended in time 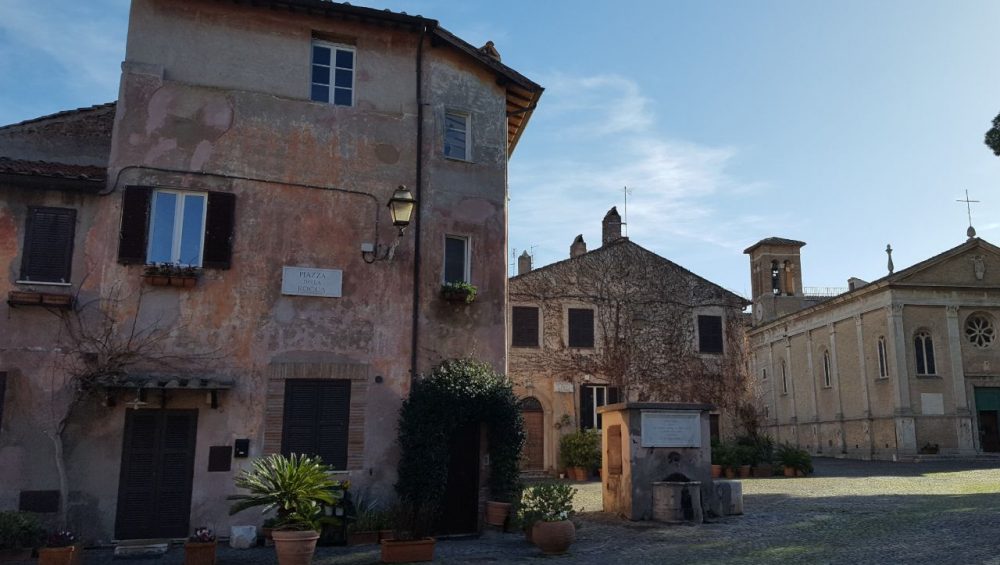 This last article closes the column on the monuments of the Borgo di Ostia Antica. The ancient village owes its origin to the decline of Ostia Antica. In the Middle Ages, in fact, the city was gradually abandoned and a modest village was built behind it, around the church dedicated to Sant’Aurea. This first inhabited nucleus took the name of “Gregoriopoli”, from its founder Gregorio IV. The pontiff, in the ninth century, decided to protect the few inhabitants by building a fortification that could defend them from Saracen raids.

However, it was during the fifteenth century that the Borgo di Ostia Antica took on the appearance it still retains today. Pope Martin V had a round tower built surrounded by a moat, while Cardinal William of Estouteville (Bishop of Ostia from 1461 to 1483) promoted the restoration of the entire quadrangular wall circuit.
On the north side of the walls there are currently two doors: the main one, on via dei Romagnoli, is protected to the west by a rectangular tower. A marble mask from the ancient Roman theater is walled up on it. Other marble fragments from the Roman age, such as the remains of capitals and columns, are reused in the internal walls of the door. On the external front of the walls, on the other hand, the marble coats of arms of the Cardinal of Estouteville are visible, depicting the rampant lion with lilies, the symbol of his family. One of them, located on the north side, bears the date 1471. The smaller door opens onto Piazza Umberto I.

Cardinal d’Estouteville also had the Basilica of Sant’Aurea restored in 1483 and built the three rows of terraced houses, characterized by a rectangular plan divided along the longitudinal axis by a bearing wall corresponding, in elevation, to the ridge line of the roof.

Between 1483 and 1486, Cardinal Giuliano della Rovere, future Pope Julius II, had the castle that dominates the village built and which today bears his name. The project is attributed to the architect Baccio Pontelli, although there are conflicting voices that attribute it to Giuliano da Sangallo or to Francesco di Giorgio Martini. It is one of the first examples of Renaissance military architecture. The function of the castle was to control access to Rome from the Tiber and therefore as customs. At least until the disastrous flood of 1557 which forever deviated the course of the Tiber leaving the moat dry. In fact, once upon a time the Tiber flowed at the foot of the fortification, roughly where Viale dei Romagnoli is now located. The castle can be visited on Saturdays, Sundays and public holidays from 9:30 to 18:30 (last admission at 18:00). All information can be found by following this link.

About 260 people lived in the Borgo in the 17th century. The area, which has become marshy, was reclaimed in the 19th century by the Romagna farm laborers, whose monument is located just outside the walls.