The Episcope of Ostia Antica 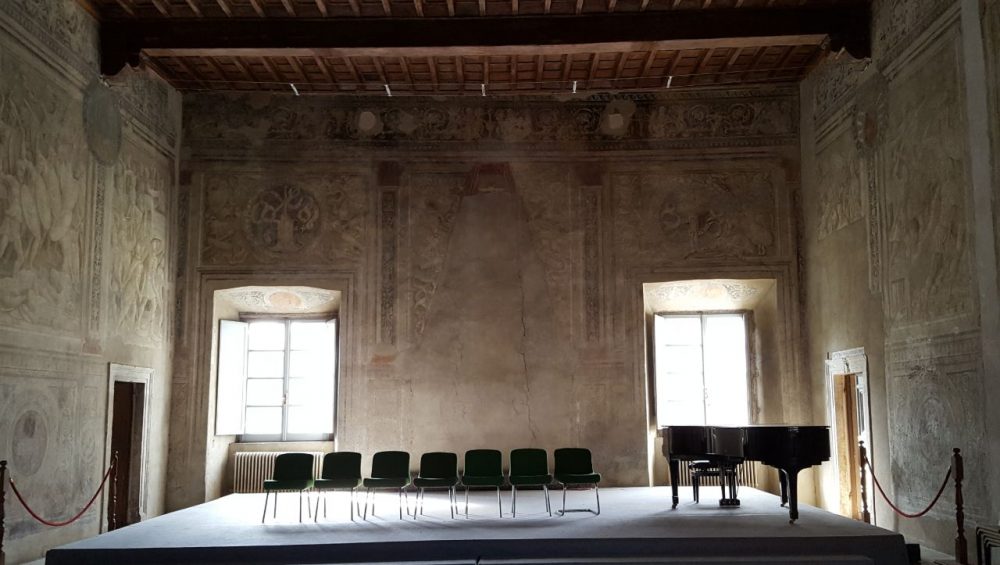 A primitive structure of the Episcope probably existed as early as the Middle Ages, but very little is known about it. In 1511 Raffaele Riario obtained the bishopric of Ostia and decided to enlarge the building. A new wing was built on the right side of the Church of Sant’Aurea, forming a single block with it.

Outside there is a seventeenth-century portico and the facade is decorated with bas-reliefs from the Roman era.

The interior was decorated between 1511 and 1513 with frescoes attributed to Baldassarre Peruzzi and aides. They were whitewashed in the seventeenth century when the building was used as a hospital and then covered with grotesques in the eighteenth century. The building was almost completely abandoned until 1914, when it was used by the Augustinian Fathers. However, the frescoes were only found in 1977 when Father Geremia Sangiorgi began the restorations based on Vasari’s descriptions.

The pictorial cycle runs on all four sides of the room and is read clockwise. The subjects of the frescoes resume those of the Trajan column, referring to contemporary events: the holy war that Julius II had declared to Louis XII, king of France.

The initial scenes on the east wall have been lost and the panels with the 18th century grotesques have been replaced in their place.

The south wall is decorated with Riario’s heraldic emblems and ancient panoplies.

The west wall is better preserved, which allows us to understand the architectural layout. The decoration is divided into three parts: starting from the bottom, the first band presents squares with geometric motifs; in the central one the panels with the enterprises of Trajan are separated by pilasters; the last part is decorated with a frieze with allegorical figures.

On the north wall are the scenes relating to the Flight of the Dacians and the Funeral of Trajan. The latter is very interesting because the original corresponding to the column does not exist.