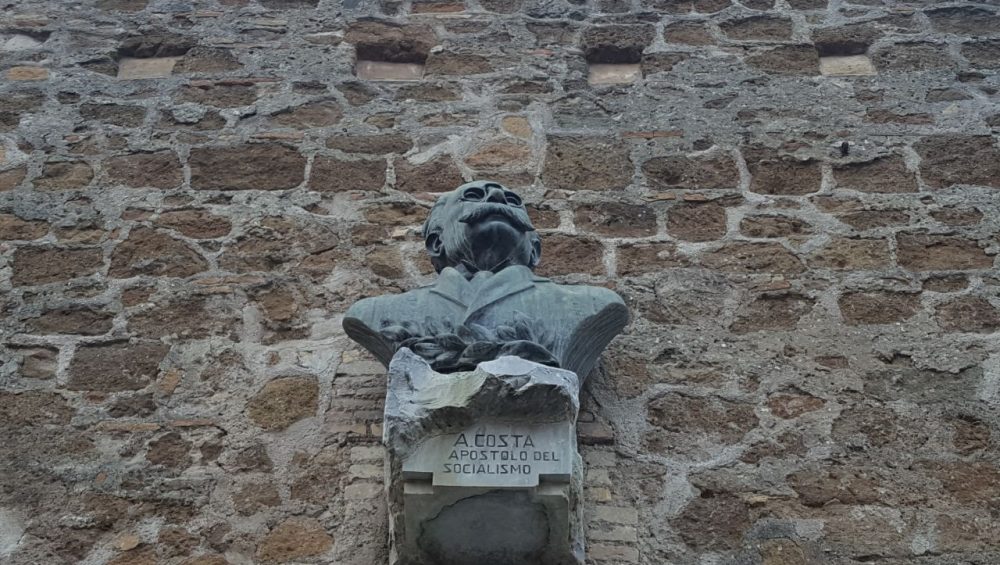 Just outside the walls of the ancient village of Ostia is the monument in honor of the Ravenna laborers, thanks to whom the reclamation of Ostia took place. In the nineteenth century, in fact, the territory was an unhealthy swamp prey to malaria and other diseases.

Between 1858 and 1868 the technicians of the Papal State attempted the hydraulic rehabilitation of some coastal areas, but with little success.

Only with the unification of Italy new intervention plans were put in place and in 1878 the law for the hygienic improvement of Rome and the reclamation of the areas of Ostia and Maccarese was approved.

In 1884 that commitment became a reality thanks to the “General Association of Workers and Laborers” of Ravenna, the first laborers’ cooperative in the history of Italy. About five hundred laborers left, left without land and without work due to the crisis in the rice fields that had hit the Ravenna area at that time. Their commitment was enormous and lasted seven years, during which many died of starvation or infected with the disease. Despite the difficulties they managed to drain the swamps, building kilometers long canals and numerous water lifting systems called “dewatering pumps”. The tenacity and sacrifice of the Ravenna people made the marshes fertile ground.

The memory and historical memory of that great effort is alive in the territory thanks to monuments and tombstones dedicated to the founding fathers.

In mid-May 1904, a plaque entitled Pane e Lavoro and dedicated to the cities of Rome and Ravenna was placed in Piazza Umberto I in Ostia Antica. The text of the plaque was written by the socialist parliamentarian Andrea Costa, one of the pioneers of that extraordinary historical enterprise, whose bust was placed above the epigraph in 1912. Under the inscription, on the other hand, is the bust of the socialist politician Nullo Baldini, a another promoter of the reclamation work.