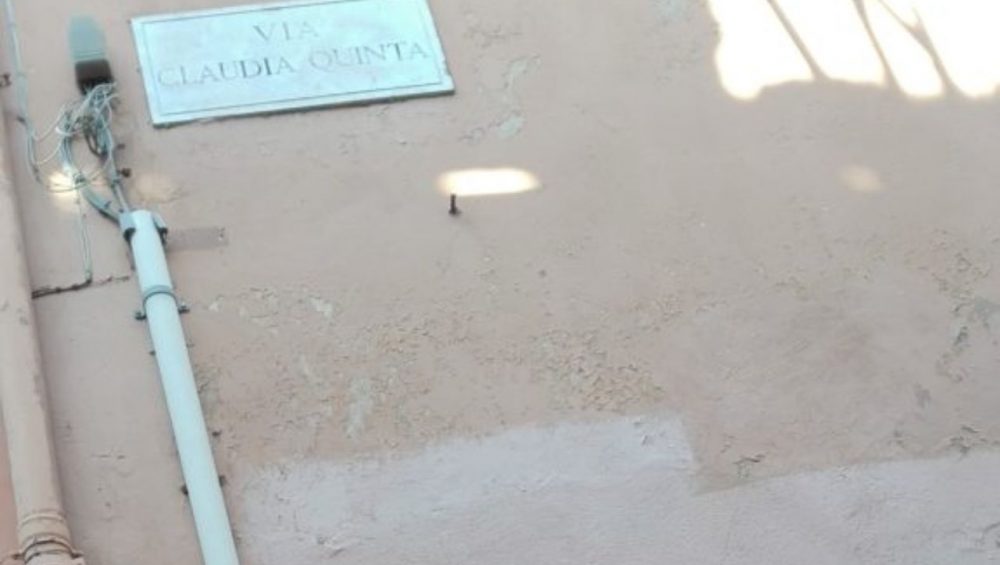 Via Claudia Quinta: The miracle of the simulacrum of Cybele

Our discovery of the characters who made the history of the Roman coast through the streets and squares dedicated to them begins from the heart of the village of Ostia Antica, where a small road leads to one of the two entrances that open into its medieval walls. The gnome Alfredo, who kindly lent himself to be a photojournalist, will accompany us on this fantastic journey between history and legends.

The street in question is named after Claudia Quinta, a Roman matron who lived at the time of the Second Punic War (III century BC), unjustly accused of scandalous behavior, who, thanks to a miraculous event, found her redemption in Ostia, becoming a symbol of virtue and chastity.

For Livio Claudia was a matron, or a married Roman woman, but over time the myth “transformed” her into a vestal (as for example Suetonius), one of the priestesses in charge of preserving the sacred fire of Rome, chosen among the most beautiful and noble of the city, forced to remain virgins until the age of 40 and endowed with unthinkable privileges for any other Roman woman. A much more appropriate “dress” to play the role of the virtuous woman par excellence that time would have attributed to her.

His story is told to us, among others, by Ovid (Fasti, IV, 305-328). It is he who tells us that she was a beautiful, noble and chaste woman, but not believed to be such (nec facies impar nobilitate fuit, casta quidem, sed non et credita). Claudia suffered from unjust accusations (rumor iniquus… et falsi criminis) because of her bearing, her clothing, even her hair! She was even accused of the (then) unforgivable “crime” of being a gossip (cultus et ornatis vari prodisse capillis obfuit ad rigidos promptaque lingua senes). This inappropriate behavior would have led to the belief that she was an adulteress.

Claudia then invoked the help of the goddess Cybele, who will become the Magna Mater of the Romans, whose ancient cult was linked to the fertility of the earth. And he did it on a special occasion, in front of everyone’s eyes. It was 204 BC. and a wave of mysticism, due to the terrible threat of Hannibal, had spread to Rome. For this reason it was decided to ask the goddess Cybele for help, and the black stone that symbolized her had been transferred to Italy from the city of Pessinunte, in Asia Minor. Claudia had been chosen, together with Scipio Nasica, to welcome the simulacrum of the goddess but the ship carrying it ran aground in the waters of the Tiber, at the mouth of the river. According to legend, Claudia would have freed her simply by pulling her with her belt, thus demonstrating the protection of the goddess and regaining her good reputation.

A story with a happy ending, therefore, which takes us back to the Rome of the Republic and to a remote era in which the accusation of immorality could decree the ruin of a person and the miraculous intervention of a goddess who came from the East for his salvation. .